CKB note: Seventy-two years ago on the night of June 1, 1942, the merchant marine ship S.S. Illinois was torpedoed and sunk by a German U-Boat 400 miles northeast of Puerto Rico. My dad was one of six survivors. He never hesitated to tell me about what happened that night and over the years I found a few news clippings about his adventures in the Merchant Marines. Until last week I never knew that he had written a letter to the parents of one of the lost Illinois crewmembers a few months after the sinking. This site came up on a search for his name and quoted from a letter published in this book. One quick trip to the LA Central Library later, here it is.

Two notes:
1. It’s worthwhile to set up a Google alert for your ancestors in addition to yourself.
2. In case you were wondering, my dad and I saw Das Boot three times together in the theater and countless more times on television. KTLA could not rerun Action In The North Atlantic often enough.

Your letter of August 27th finally caught up with me here in Golden. I have been traveling steadily since August 1st and so mail is rather late in reaching me. I hope that what little I can tell you concerning your son and the trip of the S.S. Illinois will give you peace of mind.

On the night of June 1st we were 24 degrees 20′ N. of the equator and 58 degrees 30′ Long. about 1300 miles east of Miami. I had just come off watch (4-8). Stopped in the crews’ mess for a few minutes then back aft to the crews’ quarters in the stern of the ship. The Bo’sun and Tommy (an 18 yr. old kid we picked up in Capetown – he had missed his ship) told me that Gypo (a dog we had picked up in Egypt) had a fit. It seems that the dog was excited and barked and whined, wouldn’t let anyone touch him. This was 8:30 in the evening and it was almost dark. I went on in to my quarters, took off my clothes and laid down on the bunk to read. About five minutes to nine the little dog started in again, yelling and whining. Three minutes later a torpedo hit the port side amidships. Immediately the ship’s stern went up at a 15 degree [angle]. She started to go down at once. I ran out the companionway and up onto the poop deck awning (stern of the ship). This took about 15 seconds, then another torpedo hit the ship and when I picked myself up and looked amidships she was almost underwater. It was up at about 45 degrees at the stern and a wall of water was crashing over the radio shack. I turned and ran with the list of the ship, diving off and swimming away from the suction. Looking back I saw her sink under the water.

I swam around in the dark (the sea was calm and very warm). Wreckage came up and clinging to this I waited for something to happen. A flare went up about 200 yards away, then a signal light started to blink out a message, another blinker light answered back on the other side – two subs. Then they disappeared. All this took about two minutes. Some men started to come up and yell. I found a small rubber raft that had been lying on the Poop deck. Climbing in I paddled over to where the voices were and found five men. Some badly injured from shrapnel and one with a broken leg. We hollered but received no answers.

Paddling back to the wreckage we laid the injured men on it. I went back again but could find no one. It was very dark. Returning to the wreckage I found the rest sitting on top of a capsized lifeboat. The blast from the torpedo had blown a lifeboat off. We sat up all night – four of us were naked. It was very cold. We talked about the sinking and managed to piece together where everyone was at the time. The 2nd Engineer, the only officer to escape, said that he ran to the starboard lifeboat which was next to the radio shack. He said that he saw Les at the transmitter trying to get a message off, but it was useless as the radio shack was under water in about twenty seconds. Burns, an O.S. was at the wheel and the only man forward to escape. After talking it over, we arrived at these conclusions. The first torpedo broke the ship in two (Burns was on the other half which sank in about ten to fifteen seconds). The ship sank in about thirty to thirty-five seconds. The was due to our cargo, manganese ore. The second torpedo hit the engine room killing everyone below. I was the only one to get free of the ship before she sank; the rest went down with her and were blown back up by air bubbles about two minutes later. In short, it was a miracle that any of us escaped.

The next day we started to work on turning the lifeboat over. We could work only at it a few minutes at a time as the sharks were a constant menace. We had to beat them off with pieces of wreckage. Late that afternoon we got her over and bailed out. She leaked and we had to bail constantly. We set sail in a S.W. direction. It was very cold at night and very hot during the day. Most of us were burned badly. The injured men suffered badly. Fortunately we were picked up by a tanker seven days later and landed in Trinidad three days later. Two of the men were delirious. However, the six of us survived and we flew back to Miami two weeks later.

Concerning your son, I feel that I knew him better than anyone else on the ship, as I spent a great deal of time in his quarters while at sea. We talked of his home and Orient. His little girl was his constant thought all during the trip. As far as the crew was concerned he was thought a bit odd as he was the only one aboard ship that didn’t drink or smoke. However he was well liked as he invited everyone who wanted to listen to the news up to the radio shack. As we were anxious for news, his place was packed from 7 to 8 every night, and from 12 to 1 a.m. It was the one thing we all looked forward to every day of the trip. This was against the law for seamen to be in the radio room, and we all had a soft spot for Sparks because of what he did.

Naturally, he was in for a good deal of kidding as it was his first trip at sea; he took it good-naturedly and soon became one of us. He wasn’t seasick going around the Cape of Good Hope. The only time he was sick was coming back from India, and then we all were because of bad water. The only thing I know of that worried Les was his wife and child. He talked about them often to me and perhaps I believe he was just homesick. We all were; it was such a long trip.

We had seven or eight days to go yet before reaching Baltimore. None of us expected to get it where we did as we were so far out. In fact we all expected to arrive safely as we were so lucky during the trip. The last day and night in close to the coast we knew would be bad, but out there – well it was all so unexpected. I do know that Les could have saved himself if he had run out of the radio room to the starboard lifeboat. It would have taken him only a few seconds. There was where the 2nd Eng. went. Be apparently he chose to stay by the radio and tried to get a message off before the ship went under.

I wish I could tell you more about your son but this is about all I know. I do know that I will never forget Les and I know none of the other five survivors will.

I expect to leave for San Francisco within the next ten days for another ship. This time Australia. The work your son gave his life for is the most important work in the war. None of us want to die, but we don’t want any American soldier to die either because he didn’t have that bullet to fire, or that plane to fly, or that oil or gasoline. So we all go back, knowing it has to be done, and then we carry food and goods to build instead of destroy – safely.

Goodbye and our deepest sympathy, 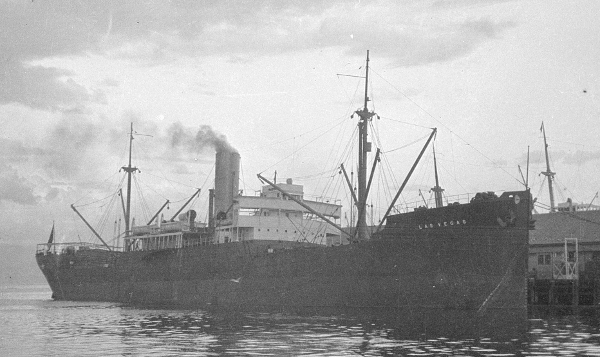 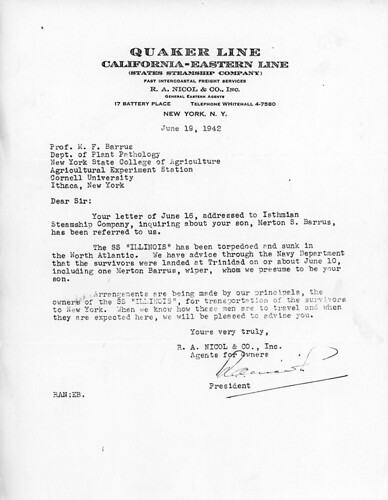 U-Boat.net’s page on the sinking of the Illinois.

An article on him from the Birmingham, AL newspaper (don’t have the date on this)

2 thoughts on “My dad and the sinking of the S.S. Illinois”