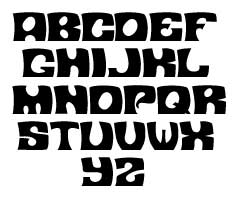 Rugby Font is a typeface based upon the lettering style used by the British psychedelic/drone band Spacemen 3 for their first couple of albums from 1986-1989. The lettering originally appeared on concert flyers in the late sixties and on some releases from the era (Shocking Blue, The Beach Boys, The Stooges, and more). The earliest known use I’ve spotted was in the opening titles of Sergio Leone’s spaghetti western For A Few Dollars More.

In keeping with the old tradition of naming Macintosh fonts after cities, I named the font “Rugby” after Spacemen 3’s hometown in the UK.

Rugby Font is freeware, though if you use it and like it – please drop me a line, send me a postcard, etc. etc.