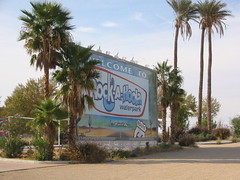 Boing Boing posts about a run-down kiddie amusement park in Egypt and I was reminded about Rock-A-Hoola.

Rock-A-Hoola is (was?) a mostly closed-but-not-quite-totally-abandoned water park out in the Mojave Desert in Newberry Springs, CA. The park has been kicking around irregularly since at least the early-70s – I remember ads for Lake Dolores (as it was known back then) airing on KTLA in the cheap post-midnight airspace alongside Truckmaster School Of Trucking and Cal Worthington. Presumably the idea was for it to be a tourist/camping stopover on the road between Los Angeles and Las Vegas. I couldn’t imagine anyone being excited to to there – it’s too far for a day trip from LA and not much there to give you a reason to stay. I suppose there’s always the Vegas crowd, but it seem like they always REALLY want to get to Vegas.

Anyway, I snagged some photos of the place in October 2003. The main water slide part of the park was fenced off (and patrolled by dogs) but I got some pictures of the surrounding facilities. I still have to question the long-term viability of a water park in an area with little water and abundant evaporation, but that’s not stopping folks from dreaming.