The NYT’s Neil Strauss on the implosion of that other teeny-bopper act. I’m still reminded of that Onion headline: “Backstreet Boys to become Backstreet Men in backstreet ritual”.

I’ve become a big fan of the music video show on World Link TV – a satellite network that broadcasts a lot of foreign television, independent news productions, and totally off the wall stuff.

Not surprisingly, most of what’s on the show is light years better than any video shown on MTV in the past fifteen years. Apparently music video production in the rest of the world is happily stuck in 1981 with all of its new wave charm and goofiness intact.

Case in point: Davoli. They’re from Croatia. I finally got around to dumping their video off of the TiVo last night…

Stuck for a name for your new band? Feel that said band is, well, kinda average? Your name has already been chosen for you by the Ten Thousand Statistically Grammar-Average Fake Band Name Generator.

Have to admit that I kinda like Automata Boutique.

Why bother with American Idol, when the real thing is even funnier?

Celebrity journalist Lynn Hirschberg profiles former Backstreet girlfriend and would-be-edgy-rock-star Amanda Latona and portrays the breakthrough artist as a malleable, fame-chasing airhead and her handlers as just as cynical and corrupt as any caricature of record execs ever created. (I’m shocked, shocked to find egocentric morons in the music industry)

And if girl empowerment is what people are buying, Latona will gladly sing the part.

Of course, should her album tank, the music industry would never blame themselves or the focus groups that went into the production and marketing – it’s those damn net pirates.

The song is sort of an early 80s new wave pastiche, but the video for it is a mind-blowing hypnotic mix-up of morphing infographics.

Friend and cool-guy-at-large Chris Reid sent me an email mentioning the band he’s in: “I Am Not The Janitor” along with a couple of mp3s from a recent show. Cool stuff, kinda reminds me of Seefeel. Also check out his other band The Sirago 17.

Like ’em or not, Doors drummer John Densmore’s commentary about trying to maintain cred under increasing pressure to sell classic songs to commercials is refreshingly idealistic in a world where everything has a price.

I am reminded of the sound of greed, trying to talk me into not vetoing a Doors song for a cigarette ad in Japan.

“It’s the only way to get a hit over there, John. They love commercials. It’s the new thing!”

“What about encouraging kids to smoke, Ray?”

“You always have to be PC, don’t you, John?” I stuck to my guns and vetoed the offer, thinking about the karma if we did it. Manzarek has recently been battling stomach ulcers. So muster up courage, you capitalists; hoarding hurts the system–inner as well as outer.

So it’s been a lonely road resisting the chants of the rising solicitations: “Everybody has a price, don’t they?” Every time we (or I) resist, they up the ante. An Internet company recently offered three mil for “Break on Through.” Jim’s “pal” (as he portrays himself in his bio) said yes, and Robby joined me in a resounding no! “We’ll give them another half mil, and throw in a computer!” the prez of Apple pleaded late one night. 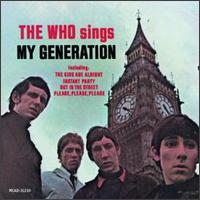 This is just so damn sad and depressing that I feel like I’ve been kicked in the stomach.

This is the coolest album ever (not to mention the coolest album cover) and was single-handedly responsible for me to pick up a bass guitar… I was 15 years old and had never voluntarily picked up any instrument, but Entwistle’s bass solo in “My Generation” caused me to obsess over the bass – and a bright red P-Bass clone that cost me $75.
When I was 16 the following year, I blew up my stereo speakers to Entwistle’s bass solo in “Trick Of The Light” – just too damn loud…