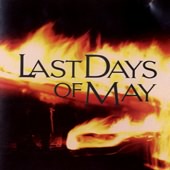 Matt Maxwell (who provided the cover art for the album) interviewed Karl for the Ptolemaic Terrascope back in the day and the full interview never made it into the mag but Matt posted the complete text on his blog. Read here for a macroscopic discussion on The Drone, the psychology of people who want to be in a band, and the dog biscuit factory.

K: Not exactly. That just seems the inevitable objective analysis. Simply because, when I started trying to play rock years ago, I wanted to be in the [Rock] tradition. I wanted money and girls and fame. For about a minute.

K: Oh, well. When you’re 16, things look pretty bleak on the other side of that Pink Floyd album cover. You start thinking about ways to re-invent things. But that lasts for about a second until punk rock comes along and blows things away. And then the lifelong project to destroy all music…(laughter)…starts to take form.

I was just contemplating this question of just what LDOM does. And I cannot conceive of it exactly in terms of tradition. Certainly there are going to be people who can listen to it and say “indeed this is in the tradition of free music.” But it seems to me what we’re actually doing particularly, is a very singular thing. But LDOM is not consciously avant-garde. We’re not pushing the theoretical limit of art. We’re not trying to stretch a conceptual boundary, or to challenge a listener in any way.

K: Hell, no. We like that. The only reason that makes it worth listening to is that it rocks out. That’s the problem that Rock has, is that stuff that rocks out is really rare. Lots of people plod and some of them thud. A few of them swing a little.

K: Actually, a lot of people rock, but it’s pretty predetermined. That is, you’re not too often surprised. And generally, audiences don’t want to be surprised.

Visit mysterious cabbages on the Last Days Of May web site.