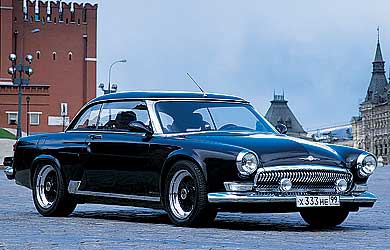 There’s not much to Soviet-era automobiles. There’s the oddball Trabant from East Germany and a handful of Russian builders, but none of them really built anything that stood out to be something other than “generic sedan in old background photo.” Volgas were fashionable (Yuri Gagarin drove one!), but the company never really designed and built anything outside of basic utilitarian sedans. And c’mon, if James Bond gets to drive a Aston Martin do you really think that a stylish KGB agent would want to drive a box?This “what if” was answered by Russian custom car manufacturer A:Level who took a BMW 850csi and created a new body based on the 1957 Volga. The end result is the Volga V12 Coupe which is the coolest looking car I’ve seen in years. There’s only one and A:Level refuses to make any more, but it’s making the rounds of the European auto show circuit. Car And Driver magazine has the complete rundown.