A couple of worthy stories over on Airminded. The first comes from a DOE atomic bomb test in 1957 to see what would happen if a Navy airship was used to deliver a nuclear depth charge.

In short, the bomb wins:

The second story concerns the latter days of Hammer Films in the early 1970s and an unmade film with the working title Zeppelin vs Pterodactyls.

The story was along the lines of THE LAND THAT TIME FORGOT, with a German Zeppelin being blown off-course during a bombing raid on London and winding up at a “lost continent”-type place.

The Land That Time Forgot is still essential viewing here whenever I run across it, but Zeppelin vs. Pterodactyls would have obsoleted it instantly. Hammer only got as far as commissioning up a poster to attract investors, but holy cow what a poster! 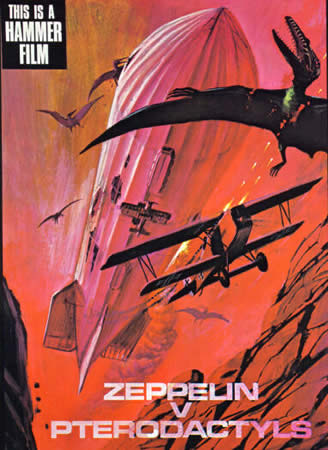 Microgramma font is instant Stendhal syndrome for me.

5 thoughts on “Nukes vs. Zeppelins vs. Pterodactyls”