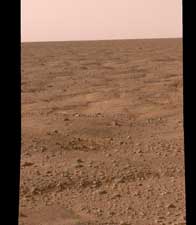 Congratulations everyone! Our Martian robot population increases by one. The Bad Astronomy guy (via Making Light) beats his chest for the humans a little loud, so I have to add my own experience in here.

During the landing I was at a pretty substantial bar-be-que party. I’m holding my phone (tuned into the Mars coverage) in one hand, cradling my beer with the other hand, and I’m outside watching a band play. In some sort of sartorial self-realization I concluded that “hey, the future is pretty cool after all.”

That parachute photo is pretty fantastic though.

Also fantastic is this photo from NASA Watch. Devon Island is an arctic island where several research groups have been operating because it’s considered to be a pretty good analog to Mars. I’ll say it is!